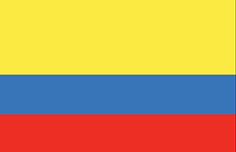 -
Secular holiday : On October 12, 1492, Christopher Colombus, a navigator from Genova, reached the New World. Numerous nations celebrate this event on October 12. In the U.S. and in Colombia, the celebration takes place on the second Monday of October.

All Saints Day (forwarded to Monday)

-
Secular holiday : Cartagena city was the first of those in Colombia and Venezuela to declare on 11 November, 1811 absolute independence from Spain. Known as the Republic of Cartagena, it was one of the bases used by Simon Bolivar to launch his campaign to liberate Venezuela.

-
cards/flowers : Commemorates the rededication of the Holy Temple in Jerusalem during the Maccabean Revolt (2nd century BC) NOT a public holiday

-
Secular holiday : The term comes from ancient Greek and means appearance. Celebrated on the 6th January, this feast corresponds to the presentation of Child Jesus to the Magi. This is the day of Jesus' first miracle, the Wedding in Cana , and the day of his own baptism.

-
School holidays : Https://www.redacademica.edu.co
calendar issued by the Ministry of Education
all study programs are aligned with the requirements of the Bologna Process

We carry confirmed dates till Feb 2023 in Bogotá

Please note that authorities may take last-minute decisions; please double-check if this information is vital to you
Make a Paypal donation of euros 50 to [email protected] to purchase the full calendar for 5 countries, including Colombian schools
Contact [email protected] to purchase a file containing confirmed calendars of 550 countries and regions.

-
Catholic : Tribute to Joseph, spouse of the Virgin Mary.