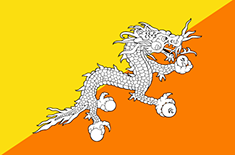 https://www.rtc.bt
Schooling is not compulsory
only 25% of Bhutanese children attend school in 430 schools.
35 schools are being build yearly
Teaching languages: Dzongkha, English

We carry confirmed dates in Thimphu till Aug 2023

Please note that authorities may take last-minute decisions; please double-check if this information is vital to you
Make a Paypal donation of euros 50 to [email protected] to purchase the full calendar for 5 countries, including Bhutanese schools
Contact [email protected] to purchase a file containing confirmed calendars of 550 countries and regions.

-
Secular holiday : The winter solstice is the moment when the earth is at a point in its orbit where one hemisphere is most inclined away from the Sun. This causes the Sun to appear at its farthest below the celestial equator when viewed from the far hemisphere. Solstice is a Latin borrowing and means sun stand still , referring to the appearance that the Sun's noontime elevation change stops its progress, either northerly or southerly. The day of the winter solstice is the shortest day and the longest night of the year.